"The Orchard at the Edge of Town" (Shirlee McCoy) ★★★★ with GIVEAWAY!! 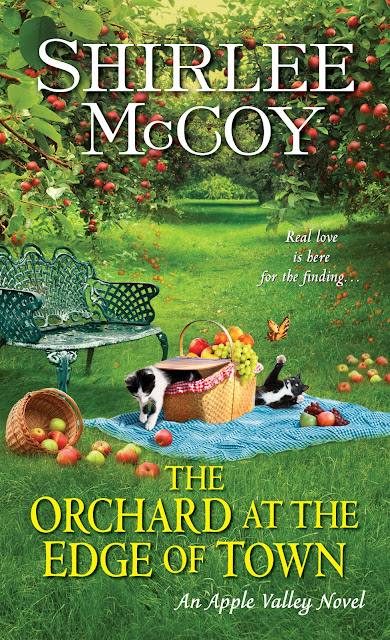 BOOK SUMMARY
Apple Valley, Washington, is where starting over means surprising new chances, facing trouble always brings a helping hand—and the most unlikely hopes can forever come true…
Apricot Sunshine Devereux-Miller needs to stay lost.  Her eccentric aunt's home in Apple Valley is the perfect place to forget her cheating ex-fiancé and get her no-longer-perfect life back under control. Plus, it couldn't hurt to fix up the house and turn its neglected orchard into a thriving business.  And if Apricot can keep Deputy Sheriff Simon Baylor's two lively young daughters out of mischief, maybe she can ignore that he’s downright irresistible—and everything she never dreamed she'd find ...

Simon isn't looking to have his heart broken again.  He already has his hands full raising his girls. And lately he's thinking way too much about Apricot's take-charge energy and unwitting knack for stirring up trouble. He can't see a single way they could ever be right for each other. Unless they can take a crazy chance on trusting their hearts—and risking the courage to finally find their way home.

EXCERPT
Somewhere a rooster called a warning, and a bird flew from the tree beside her. She’d spent most of her childhood walking the woods of Happy Dale. Mostly alone. Lots of times at night when her overwhelming family had been too loud and boisterous and she’d wanted nothing more than to escape the little house and all the crazy people in it. She knew night sounds and nocturnal animals. She knew the difference between a deer stepping gingerly through a thicket and a man sliding through trees.
Right at that moment, she was sure she heard footsteps.
She glanced over her shoulder. Rose’s house jutted up from the yard, light spilling out of the kitchen window and splashing gold across well-trimmed grass. A shadow moved near the corner of the house, undulating with the branches of an old pine tree that stood near the edge of the yard.
“Hello?” she called, moving toward it.
Something lunged from the shadows, and she screamed, backed up so fast she fell on her butt. She lay there for a moment, stunned, staring up at the dusky sky.
Get up, her mind screamed. You’re about to be attacked, and you’re just lying here like a sack of potatoes!
She was almost on her feet when something landed on her back. Not a heavy weight. Light and purring.
“Handsome?” She gasped, so relieved she sat down again, dragging the kitten off her back and into her lap. His purr sounded like an old-man’s snore, his claws digging into her thighs as he tried to make himself comfortable.
“Ouch. Cool it!”
“Cool what?” a masculine voice asked, and she screamed so loudly, Handsome jumped off her lap and ran for cover.
“Sorry. Didn’t mean to scare the living daylights out of you.”
She knew the Southern drawl, the broad shoulders backlit by the kitchen light. Simon.
Relieved, she accepted the hand he held out, allowed herself to be pulled to her feet.
“What are you doing here?” she asked, his hand still wrapped around hers, all warm and calloused and nice.
“Do you even need to ask?”
“Yes. No,” she blabbered, her heart beating way faster than it should have been, her cheeks flushed. “The kittens, right?”
“I heard them crying while I was helping the girls with their homework. I guess they weren’t happy about being in a box under Evie’s bed.” He released her hand, and she had to admit she was just a little sorry about it. Simon was one of those guys her family liked to laugh at—straitlaced, kind, uncomplicated, drama-free.
Dependable was the word Rose would have used, and she’d have spit it out like it was dirtier than any four-letter curse she’d ever uttered.
“They’re all waiting on the front porch,” he continued, heading around the side of the house. “The girls are probably ringing the doorbell sixty-five thousand times.”
“Doorbells are fun when you’re eight,” she replied, her insides all kinds of soft and mushy as she watched him scoop Handsome out of a bush that pressed up against the house.
“Here’s the other one. I guess the girls didn’t think he was worthy of stealing.” He sounded disgusted and just a little tired.
“They weren’t stealing. They were giving the kittens a home.”
“Let’s not play the semantic card, okay?” He sighed. “They took things that weren’t theirs, hid them in their room, and didn’t plan to say a word to me about it.”
“You’re really angry about a childish mistake.”
“A mistake is when you drop a glass or knock over a cup of water,” he grumbled, stalking up the porch steps.
The twins were there. One had tears streaming down her face. The other looked fit to be tied, her eyes flashing with frustration, her lips pressed together.
“I see my missing kittens have returned. I was wondering where they’d wandered off to,” Apricot said, hoping to lighten the mood. There’d been very few rules when she was a kid, so she had no idea what it felt like to be on the receiving end of a parent’s ire, but she had a feeling the twins had already found out.
“They didn’t go missing, Apricot,” the sobbing twin managed to gasp. “We took them, because we love them.”
“And Daddy said we had to apologize,” the scowling twin added. Had to be Evie. She seemed to be the feisty one out of the pair. “Even though we didn’t do anything wrong.”
“You took someone’s cats, Evangeline,” Simon said, and he sounded like he was at the last edge of his patience.
“How about we all go inside for a minute?” Apricot suggested. “We can sort it out there.”


“Into the haunted house?” Rori breathed. “What if the ghosts get us?”

CAT'S REVIEW
In "The Orchard at the Edge of Town", we meet Apricot.  Apricot is fun and full of life, she's kind and generous, she does all she can to help others and she is bubbly and sunny.  She's all around a great person but beneath the sunshine is pain and hurt.  While visiting Apple Valley to mend her broken heart, she meets Simon.  He's a widower with twin girls and is one of the more perfect men around - both in looks and in actions.  He's a real charmer but is honest and truthful in all he says and does.  He and Apricot are fun together.  They both smile more and enjoy each other's company.  The twins are cute, although they did come across younger than they were supposed to be, but it doesn't distract or harm the overall story.  I loved that Ms. McCoy didn't make the twins perfect and that Apricot was honest about how much energy it took to take care of them.   Often in stories, when children are looked after, the heroine can do no wrong and never admits it tough work.   The other characters we meet make this town a colorful, if not a bit nutty, place to live.  There's even a crazy lady trying to make trouble for the two lovebirds.    Ms. McCoy has written a tale that is clean, refreshing and fun.  I was smiling and chuckling throughout and enjoyed it immensely.  (received copy from NetGalley for honest review)

AUTHOR INFO
Shirlee McCoy spent her childhood making up stories and acting them out with her sister. It wasn’t long before she discovered Nancy Drew, The Hardy Boys, her mother’s gothic romances . . . and became an ardent fan of romantic suspense. She still enjoys losing herself in a good book. And she still loves making up stories. Shirlee and her husband live in Washington and have five children.
Readers can visit her website at www.shirleemccoy.com.

a Rafflecopter giveaway
Posted by Cat's Reviews at 7:00 AM 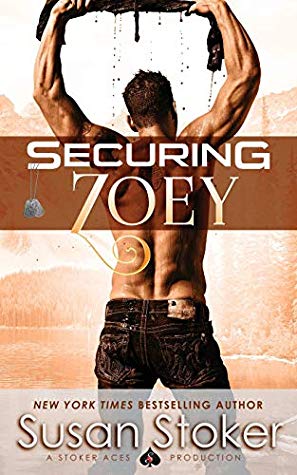